skip to main | skip to sidebar

It's going to be a long day tomorrow (today)

I've been back at CNN for two weeks now after two and a half months on sick leave for my broken leg. My leg is still bothering me a lot. Especially when I'm on it for long periods. Wednesday-Thursday is the worst. I got up at 2pm today after 4 hours of sleep because I had errands to do for DH. Then I drove to Atlanta from the farm in Alabama to go to work. In the morning I will leave and go straight to the shop, which is open until 9p for Knit Night. If I'm lucky I will get an hour nap before the store opens. Despite the long hours, I still wouldn't give it up. The advertising I've been doing on the local cable company is starting to bring more people into the store and my regulars have been wonderful. 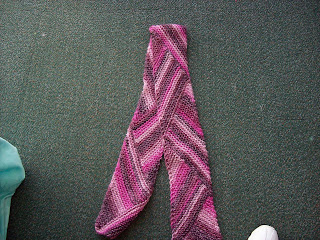 I did another intermediate knitting class, using the multi-directional scarf as a final project. This is my version done in Gipsy. I've done this scarf at least four times including once with some of my hand spun yarn

DH has finished the major knitting on his first sweater. I am doing the finishing on it. I'm going to try to get it done while he is in Florida. I will post it when it's finished. He has already started a second sweater. 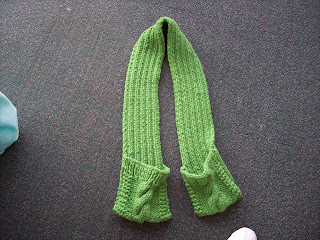 This is one of the scarves he made for the store. The pattern is mine and is done out of Cascade Lana Grande.
Break over. Better get back to work.
Posted by Pat at 1:56 AM

For Email Marketing you can trust

Plugin supplied by Your Christmas Countdown